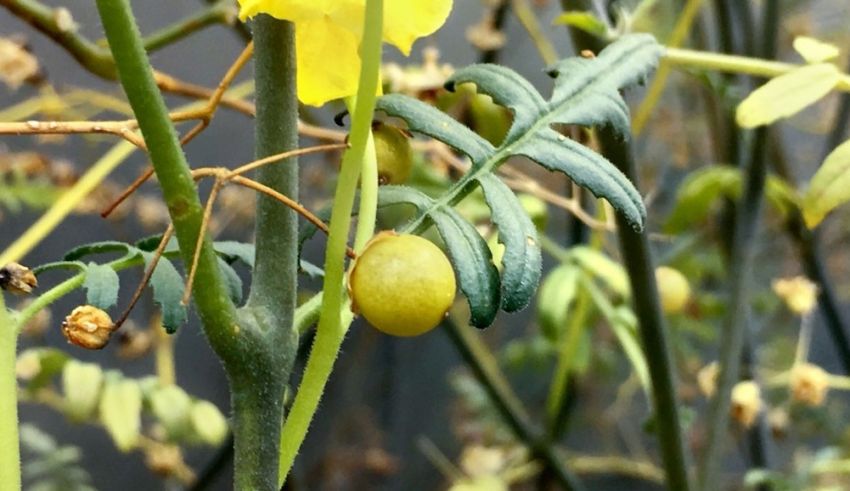 Solanum lycopersicoides, shown here in growing in a BTI greenhouse, harbors genes that could improve tomatoes and other crops.

A team of researchers has assembled a reference genome for Solanum lycopersicoides, a wild relative of the cultivated tomato, and developed web-based tools to help plant researchers and breeders improve the crop.

Solanum lycopersicoides (S. lycopersicoides) harbors a gene making the plant resistant to a particular strain of bacterial speck disease. The gene could be introduced into cultivated tomatoes to protect them from the pathogen.

That discovery led Boyce Thompson Institute researchers to sequence the plant’s genome and create online resources to facilitate the discovery of more genes that could improve tomatoes.

“There wasn’t even really a discussion about whether to sequence Solanum lycopersicoides, it was just obvious to do it,” said Susan Strickler, director of the BTI Computational Biology Center (BCBC). Strickler is co-corresponding author of the paper describing the S. lycopersicoides genome, which was published in The Plant Journal on May 18.

Wild relatives of crops are becoming increasingly valuable to plant researchers and breeders. During the process of domestication, crops tend to lose many genes, but wild relatives often retain genes that could be useful – such as genes that confer resistance to drought and disease.

Perhaps more importantly, a larger goal of the project was to make the S. lycopersicoides reference genome as widely accessible and useful to the scientific community as possible.

“These kinds of data are added to the National Center for Biotechnology Information repository as a general requirement, and that’s important, but not everyone is a bioinformaticist or has access to bioinformatics resources to analyze the data,” said Adrian Powell, assistant director of BCBC and a first author on the paper.

“To increase access and ease of exploring the genome, we developed web-based tools and components that researchers beyond our project team could use and add to,” he said.

One tool is a S. lycopersicoides genome browser available on the Sol Genomics Network website, which serves as community resource and repository for tomatoes and other species in the Solanaceae family. Powell said the browser can aid early exploratory studies of the wild tomato species as well as more advanced studies.

Another tool is an S. lycopersicoides expression atlas, which allows users to analyze RNA sequencing data and visualize which genes are expressed in different plant tissues and under different conditions. “The atlas is based on code first developed for the cultivated tomato, but now we have a version for the wild species,” Powell said.

These tools, combined with the new reference genome, will help researchers analyze hybrids of the wild tomato and cultivated tomato more readily than they could before, and they will also help researchers who are studying the wild species for its own sake, he said.

For example, the reference genome could facilitate genome-wide association studies (GWAS) on multiple S. lycopersicoides accessions, to assess genetic diversity of the species and identify candidate genes for the traits breeders might want to introduce into cultivated tomatoes, such as drought tolerance, Powell said.

Co-authors of the paper include BTI professors Lukas Mueller, Greg Martin, Zhangjun Fei and Jim Giovannoni. Martin is also a professor in the College of Agriculture and Life Sciences (CALS), and Mueller, Fei and Giovannoni are adjunct professors in CALS. Giovannoni is also a research molecular biologist with the U.S. Department of Agriculture Agricultural Research Service (USDA-ARS).

The study was supported in part by grants from the joint ERA CAPS Regulatome project, the National Science Foundation, the Triad Foundation, the Max-Planck-Society and the European Union project PlantaSyst, and Germany’s Federal Ministry of Education and Research. — By Michael J. Haas, Boyce Thompson Institute, Cornell University