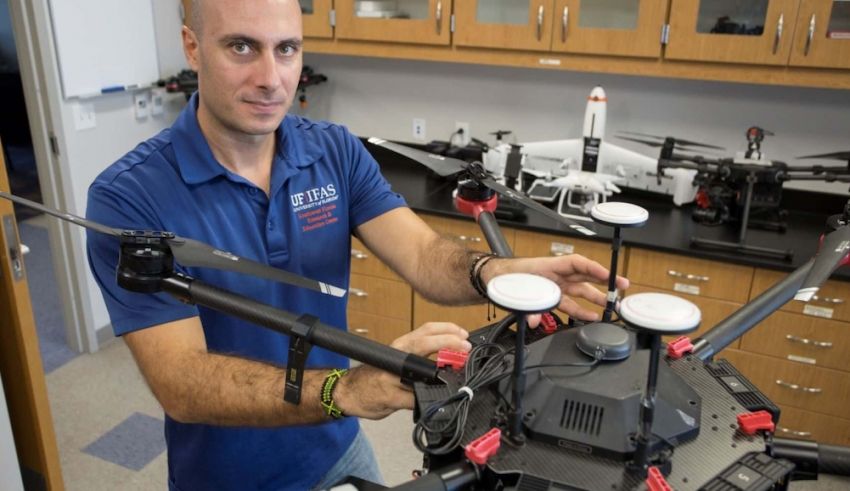 Yiannis Ampatzidis, a UF/IFAS agricultural engineer at the Southwest Florida Research and Education Center, is shown with drones in the laboratory. UF/IFAS photography.

If you savor a juicy watermelon in the scorching summer heat, farmers toil to meet your tastes. But, like all farmers, those who produce watermelons seek ways to control diseases, so they don’t lose all or part of their crops. The needs of growers drive Yiannis Ampatzidis to use artificial intelligence to detect pathogens early and accurately.

One such disease, downy mildew, spreads like wildfire, said Ampatzidis, an Associate Professor of Ag & Biological Engineering at the University of Florida.

In newly published research, Ampatzidis used spectral reflectance —  the energy a surface reflects at specific wavelengths — of plant canopies and machine learning to quickly and efficiently detect downy mildew in several stages of the disease.

Hopefully, farmers can take advantage of this technology.

“If left unchecked, downy mildew can destroy a farmer’s entire crop within days. That’s why it gets the nickname ‘wildfire.’ It spreads rapidly and scorches leaves,” said Ampatzidis, a faculty member at the Southwest Florida Research and Education Center.

“Our most important result was finding downy mildew in its earliest stage, which is critical to growers’ ability to manage this disease,” he said.

Ampatzidis and his research team developed two methods, utilizing hyperspectral imaging and AI — one in the laboratory and the other using UAVs (drones) for field detection.

Downy mildew does not affect stems or fruit directly. But it can defoliate the plants, leaving fruit exposed to sun damage, making it unmarketable.

As long as consumers continue to buy watermelon — and those who grow the fruit want to reap a good harvest — Ampatzidis will continue to find ways to find pathogens that could damage the fruit.

As next steps in his research, Ampatzidis wants to develop a simple and inexpensive drone-based sensor to improve detection of downy mildew in watermelon plants. — By Brad Buck, University of Florida, Institute of Food & Agricultural Sciences