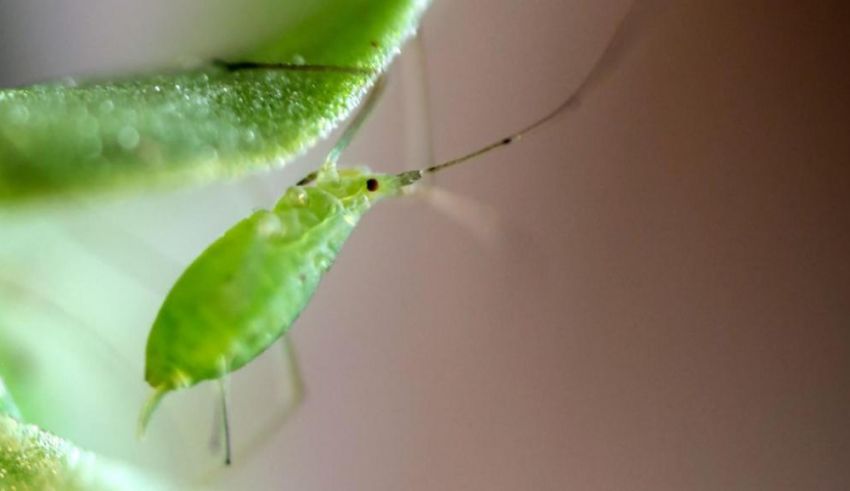 A pea aphid, the same species used in the study (Photo by Russell Ligon).

The word ‘honeydew’ sounds benign, but the sugary waste product of aphids can promote growth of bacteria that are highly virulent to the pests, according to a new study.

The research takes a step towards understanding how some strains of the bacteria Pseudomonas syringae that live on leaves and are pathogenic to aphids might one day be used to control the pests. Aphids transmit plant viruses when they feed on sap, costing billions of dollars in annual crop damage around the world.

The paper, “Context Dependent Benefits of Aphids for Bacteria in the Phyllosphere,” published Jan. 12 in The American Naturalist, assessed the virulence of different strains of P. syringae to aphids. The researchers also investigated how well the bacteria survive on leaf surfaces without aphids, and whether bacteria benefited from the presence of aphids.

“For one of the experiments, we actually took the aphids out of the picture entirely,” said Melanie Smee, the paper’s first author and a postdoctoral researcher in the lab of co-author Tory Hendry, assistant professor of microbiology in the College of Agriculture and Life Sciences.

“We literally just sprayed fake honeydew on to leaves, and we still saw the same increase for the bacteria [as when aphids were present], so it’s really just the honeydew that’s helping the bacteria,” Smee said.

In the study, Smee and Hendry identified 21 strains of varying virulence to aphids. They then chose eight of those strains. For each strain, they sprayed bacteria onto plants with aphids and other plants without aphids, to see if the bacteria benefited from the aphids presence. They measured bacterial growth on leaves and found that half of the strains benefited significantly.

The next step was to try to understand the source of that benefit. They knew the bacteria are consumed and then grow within aphids and then are excreted out, so they wanted to see if passage through the aphids helped bacterial populations thrive. They set up a new experiment, with the aphids suspended above leaves that had been sprayed with bacteria. They fed one set of aphids an artificial diet with bacteria, and another set without bacteria, and the aphids then excreted honeydew onto the leaves below.

They found it didn’t matter whether aphids were fed bacteria; all the bacteria on the leaves did better in the presence of aphids. It turned out that the honeydew was the only factor that boosted bacterial populations.

They also found that benefits from honeydew to bacteria were not correlated to strain traits, but they were affected by the initial population densities, such that smaller populations increased more with honeydew, compared with large populations, which increased less.

More work is needed to determine which P. syringae strains are pathogenic to plants, an important consideration if bacteria are used for pest control. The researchers are also interested in investigating the role of the interaction of bacterial communities.

The study was funded by the U.S. Department of Agriculture’s National Institute of Food and Agriculture and by Cornell. — By Krishna Ramanujan, Cornell College of Agriculture & Life Sciences