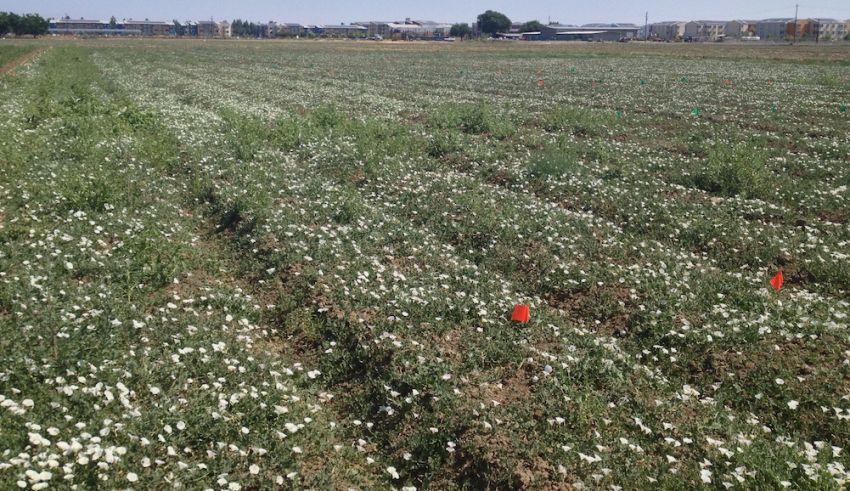 Field bindweed (Convolvulsus arvensis) is considered by many tomato growers to be the most problematic of all weeds in California production areas. Indeed, field bindweed and the closely related morning glory weeds were ranked the 8th most troublesome weeds in North America in a recent survey by the Weed Science Society of America. The rapid adoption of drip irrigation and the economic necessity of maintaining the beds and replanting with only minimal tillage for multiple seasons in processing tomatoes has created a system where field bindweed has become more prevalent. Field bindweed is extremely difficult to control because it propagates from seed and vegetatively from buds formed in the roots. Seedlings can be controlled with tillage when very young, but they become perennial very rapidly. Chemical control of seedlings is possible, but established plants are much more difficult to control. Established plants often have a large root system relative to the amount of top growth, and thus are extremely tolerant of post emergence herbicides such as carfentrazone (Shark), glufosinate (Rely), and glyphosate (Roundup).

Bindweed is a headache not only for its persistent and pernicious growth habit and ability to reduce tomato yields, but also because it can physically stop a processing tomato harvester in the field. Vigorously growing vines can become entangled around the shaker and conveyor belts, requiring the equipment operator to shut down and manually clear out the foliage.

Several years ago, myself and other UC researchers conducted herbicide trials evaluating field bindweed control — with marginal success. In a given year and location, most of the registered herbicides in tomatoes gave only temporary suppression – about 40 – 80% bindweed control at 8 weeks after transplanting. Best results were observed where herbicides were stacked: trifluralin (Treflan) pre-plant incorporated followed by rimsulfuron (Matrix) post. Glyphosate helped in situations where the bindweed emerged early and could be applied before transplanting (Figure 2).

Earlier this year, I was asked to summarize the effects of weeds on processing tomato yield. This made me go back and look at this work, but with a slightly different emphasis: impact of weed control (or really, lack of weed control) on yield. To increase the size of my dataset, I also included data from trials done at UC Davis. Where I had data for both yield and weed control in good, replicated trials, I performed a regression analysis comparing % weed control and % relative yield (relative yields remove the year-to-year and location variability). In the end, I used 4 trials from 2012-13 (Table 1). Surprisingly, these data suggested that where bindweed dominated, it did not have a big impact on processing tomato yield. Even with just 50% control 8 weeks after transplanting, potential yield was 88-95%. This may have occurred because bindweed does not shade out the tomato canopy nearly as much as some of the common annual weeds. However, when tall broadleaf weeds dominated, such as pigweed, nightshades, and lambsquarters, yields dropped rapidly. I had some plots with a 99% yield drop if these weeds were allowed to grow all season. In this situation, the weeds towered over the tomato canopy.

There have been no new registered herbicides in processing tomatoes in the last 10 years, while robotic weed control has progressed rapidly during this time. Unfortunately, neither our current slate of registered herbicides nor robots provide adequate control of field bindweed. This may not matter as much as previously thought, however. The annual grasses and broadleaf weeds have far greater yield impact, especially when they grow tall and shade out the crop. Thankfully, there are several registered herbicides that provide effective control of those weed types. — By Scott Stoddard, UC Cooperative Extension