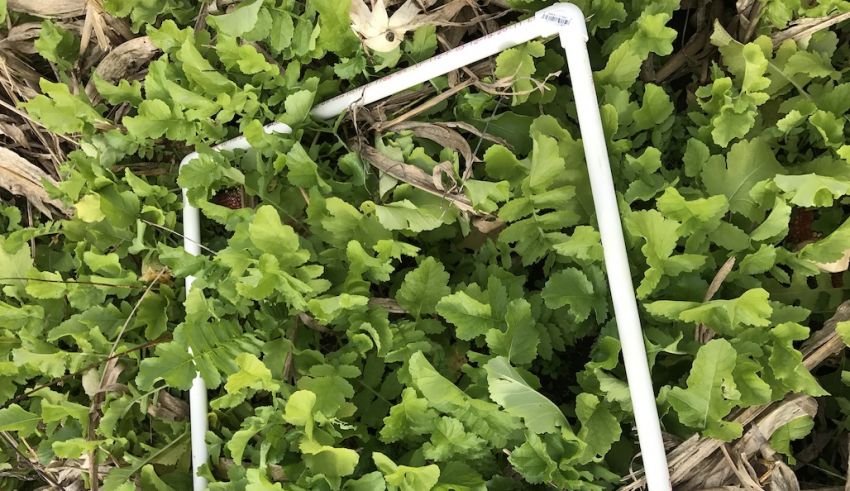 These radishes are being measured for above-ground biomass, and that’s just the tip of the iceberg! Credit: Gevan Behnke

Farmers love tools. The prospect of a fully stocked tool shed ranges from badge of honor to true obsession.  Plants, too, can be used as tools. Integrating cover crops into a farmer’s toolbox can offer many benefits – and it’s a tool given to us by nature!

Getting farmers to adopt cover crops as various tools can be hard. To do that, we need to better understand these different tools and their uses. Cover crops like clover add nitrogen to the soil, while reducing erosion and runoff. And, radishes, a tasty ingredient in salad, can be used to break up soil and other hard jobs.

Breaking up soil with radishes

Millennia ago, Greek philosophers presented the Doctrine of Signatures, stating that a plant’s appearance may resemble its practical use. For example, walnuts were linked to brain health and beans to kidneys. In thinking about the radish as a tool, the plant root could be similarly equated to the drill, a type of natural tilling.

Thick radish roots are an ideal choice for natural drilling into the soil to reduce compaction. When the radish crops are terminated, the radish and roots leave large, open pores in the soil. This increases soil aeration and water infiltration. Along with this comes more earthworm and microbial activity. It’s clear that a tillage radish cover crop certainly lives up to that name. As it turns out, the simple radish can be quite the complex tool when properly utilized.

There are many varieties of radish. From ‘Daikon’ to ‘Icicle’, knowing the specific cultivar is an important part of deciding if a radish belongs in your field or on your plate! When an agronomist recommends a radish variety for use as a cover crop, they have a job in mind to make use of these unique plant features.

Farmers turn to “scavenging” to optimize chemical inputs and yield outputs by using cover crops. The cylindrical roots of the radish grow deep and capture soil nutrients that were intended for the preceding cash crop.

Many varieties are uniquely suited for this task, having been bred specifically for deep taproots that extend several inches or even feet deeper than their thick quintessential core. By scavenging nutrients from soil layers that are the hardest for most crop roots to access, radishes can be used to target critical areas to keep nutrients from the groundwater table. Though picky eaters may leave behind a harvested radish on their plate, the radish itself helps ensure that as little as possible goes to waste in terms of subsoil nutrients.

In March 1990, Former President George HW Bush personified picky eaters everywhere when he issued the proclamation: “I’m not going to eat any more broccoli!” The president succeeded in banning the brassica from Air Force One and the White House.

The same pungent flavor that the former President didn’t like is loved by many. And its special compounds called gluconsinolates that give them their flavor. These compounds contain sulfur (like some medicines) and can also act as natural pesticides in the soil, a method known as “biofumigation.” These compounds can be a powerful deterrent to insects and even some species of fungi.

The choice depends on the job

When choosing a radish and/or any other cover crop, the most important consideration is to select the right tool for the job! For example, planting a radish in a poorly drained clay soil can drastically restrict the root growth necessary for several of the benefits. Selecting the wrong cover crop is like trying to tighten a bolt with a hammer instead of a wrench, which may explain why some don’t see convincing results.

Successful cover croppers often strengthen their polyculture by adding the radish into a multi-species mix. For those looking for a natural multi-tool to alleviate compaction, scavenge subsoil nutrients, and ward away pests, I can assure you that radishes will not leave you with a bitter taste! — By Ivan A. Dozier, CCA, Product Manager for Agronomy & Analytics at IntelinAir (American Society of Agronomy and Crop Science Society of America)