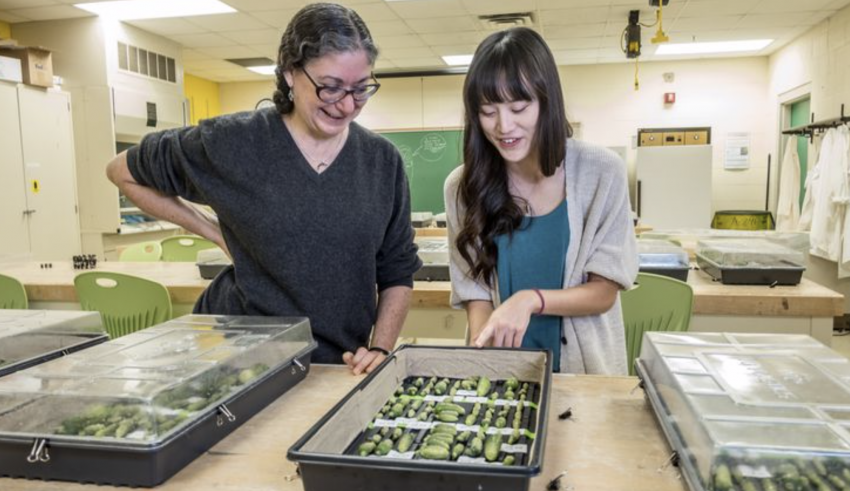 The new funding extends the project that began in 2015 for four years. The goals of CucCAP, which is led by Rebecca Grumet, a professor in the MSU Department of Horticulture, are to harness genomic resources for disease resistance and management in cucurbit crops.

“Producers and processors of cucurbit crops throughout the country consistently identify diseases as one of their most serious and costly problems,” Grumet said. “The diseases cause severe reductions in yield and crop quality, sometime causing total crop loss.

“Control measures are expensive due to chemical costs, time and labor. The most cost-effective and environmentally desirable solution is disease-resistant varieties in combination with effective integrated disease management strategies.”

To address these problems, the CucCAP team, with members from 10 institutions around the country combines expertise in genomics, bioinformatics, plant breeding, genetics, plant pathology, outreach and economics.

Genomics, which helps researchers understand the genetic makeup of cucurbit species and breed disease-resistant varieties, is one CucCAP scientists’ most important approaches. Tools developed through the project have allowed identification of genetic regions associated with resistance to important diseases.

Grumet has worked with Michigan specialty crop growers for decades on disease management issues. Her research has concentrated on reproductive development and disease resistance in cucurbits — particularly cucumbers.

This research is especially relevant to Michigan, as the state is home to the nation’s largest pickling cucumber industry, valued at nearly $50 million per year.

Mary Hausbeck, a University Distinguished Professor in the MSU Department of Plant, Soil and Microbial Sciences, is also a part of the CucCAP team. Her work for the project includes development of effective practices and timely extension resources for management of cucurbit diseases and resistance to Phytophthora fruit rot in processing squash. Additionally, researchers at partner institutions are working with a variety of fungal, oomycete and viral pathogens infecting the different cucurbit crops throughout the country.

CucCAP projects are geared toward the entire production process, from breeding and pathology to economic analysis and outreach. Commodity organizations and seed industry representatives from around the world assist in setting research priorities.

Getting information to growers about research findings is also a fundamental part of CucCAP. Outreach is conducted through meeting with growers and providing easily accessible online resources, such as disease control information on the CucCAP website. In addition, the team created a cucurbit genomics database website to serve as a central portal for genomics data and research.

“Using modern genomic tools, we can more efficiently introduce and combine genes for different resistances while maintaining high yield and important fruit quality traits,” Grumet said. “This is critically needed given the tremendous losses that can be caused by these destructive diseases.” – By Cameron Rudolph, Michigan State University