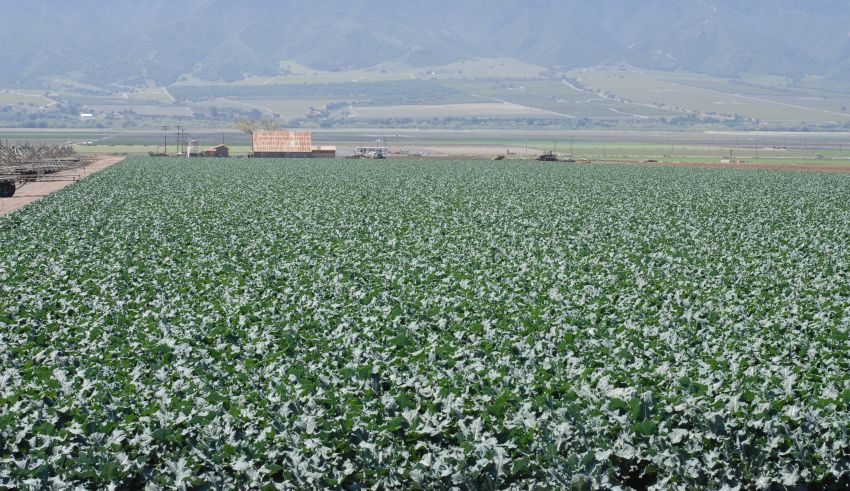 In 1999, several UC researchers published foundational research in a paper titled, “Evaluation of broccoli residue incorporation into field soil for Verticillium wilt control in cauliflower.” Since this publication more than 20 years ago, many studies have further investigated this concept and many coastal growers, especially organic producers, have adopted broccoli rotations as a strategy for Verticillium wilt control. Today, typical implementation of this strategy is two broccoli plantings back to back prior to the crop for which Verticillium wilt suppression is desired. While California coastal vegetable production has been the framework for much of this work, the adaptability of this practice to the Sacramento Valley is very promising for management of Verticillium wilt in warm and cool season crops.

Verticillium wilt is caused by the soilborne fungal pathogen Verticillium dahliae. Microsclerotia, the fungal inoculum that causes infection, dwell in the soil until root exudates stimulate germination and direct the fungal hyphae towards the root. In susceptible plants, infection occurs when hyphae enter the roots right behind the root tip, and continue growth into the water-conducting vascular tissue, the xylem. Once in the xylem, hyphal growth and sporulation can move the fungus into the upper plant tissue. Plant death triggers the fungus to a reproductive stage, prompting microsclerotia formation. When infected crop residue is incorporated into the soil, microsclerotia in the crop residue are incorporated, too. Management is particularly challenging because the pathogen host range is over 300 crops and the inoculum survive upwards of 13 years. To establish control of the pathogen, the key is to reduce inoculum—the number of microsclerotia, below levels damaging to susceptible crops.

Broccoli is one of the few non-host vegetables and member of the Brassicaceae family. Bok choy, broccoli raab, Brussels sprouts, cabbage, cauliflower, Chinese cabbage, and rapini are susceptible to V. dahliae, as are black mustard, Indian mustard, oilseed rape, and turnip. In broccoli, no infection to minor infection from V. dahliae has been observed. In the case of minor infections, the pathogen does not progress beyond the roots and microsclerotia formation in the roots is repressed. Apart from the importance of selecting a non-host as a rotation crop, the glucosinolate profile of broccoli, the secondary compounds responsible for the toxic effect, differs from other brassicaceous crops

Broccoli did not just decrease disease incidence, but decreased the amount of pathogen inoculum, showing promise for longer term management. In a California study, overall reduction in the number of propagules in V. dahliae-infested plots after two broccoli crops was approximately 94%, in contrast to the five-fold increase in the number of propagules after two cauliflower crops. These findings corroborate earlier studies showing reductions in the numbers of soilborne microsclerotia of V. dahliae and incidence of wilt on cauliflower that were comparable to reductions caused by chloropicrin and metham sodium treatments. Importantly, following broccoli rotations, microsclerotia continue to decline through-out the following cropping season and remain low during the following season. In contrast, propagules in soil fumigated with chloropicrin and metham sodium declined initially but later returned to pre-treatment levels by the end of the cropping season.

Shetty et al. (2000) reported that the effects of broccoli in reducing microsclerotia and suppressing disease may be associated with the following mechanisms: production of volatile antifungal substances such as allyl-isothiocyanate (ITC) by broccoli residue, increase in antagonistic microorganisms, and degradation of microsclerotia melanin by ligninase/melaninase produced by soil microorganisms in the presence of broccoli lignin. ITCs are chemically similar to methylisothiocyanate, the active agent from the chemical fumigant metam sodium. Likely associated with the ability to generate these conditions, fresh broccoli residue was shown to be more suppressive than dry residue. During tissue decomposition, the glucosinolates in crucifer crops, the characteristic sulfur-containing constituents of the members of Brassicaceae responsible for their inherent pungent odor, break down to produce sulfides, isothiocyanates, thiocyanates, and nitriles that have either fungistatic or fungicidal properties. In addition to release of toxic compounds and microbial activity provided by broccoli residue, the plant may be serving as a ‘decoy’, ‘trap crop’ or ‘dead end host’, further driving population numbers down. As described earlier, some V. dahliae infection is observed in broccoli roots, but it does not result in microsclerotia formation. By stimulating inoculum germination and preventing fungal reproduction, the number of viable microsclerotia decrease in the soil.

To facilitate greater adaptation of rotations with broccoli in other crops susceptible to V. dahliae, Bhat and Subbarao asked the question whether isolates of V. dahliae originating from different susceptible hosts could cause wilt on broccoli. They evaluated 15 different host isolates against multiple broccoli varieties. This included tomato, eggplant, bell pepper, lettuce, potato, watermelon and strawberry, and found that only isolates from cabbage and cauliflower were weakly pathogenic. Broccoli cultivars Baccus, Greenbelt, Parasol, Patriot, and Symphony showed resistance to Verticillium infection. This provides some evidence for the usefulness of this method in other cropping systems.

Implementation of broccoli rotations for Verticillium wilt management is optimized when two successive broccoli crops are grown immediately prior to desired Verticillium wilt reduction. Higher amounts of glucosinolates, specifically glucobrassicin, are found in older plants. Research has reported a complete absence of glucobrassicin in broccoli seedlings, 50% of the total in immature heads (5-10 cm diameter) and the highest levels at fully developed Packman broccoli heads (15-20 cm diameter). These results suggest that glucobrassicin synthesis is active during later stages of broccoli development. Plants should be mowed and finely chopped in order to disrupt the plant cells as much as possible. The greatest reductions in microsclerotia occur at soil temperatures above 68°F, and most of this reduction occurs within 15-30 days of incorporation. Variation in efficacy of this method is attributed to multiple factors: fluctuation in climate and cultivation conditions, physical and chemical properties of the soil, soil microbial properties, the type of broccoli cultivar used, differences in pathogen density, and variance in the susceptibility of the following crop host. The types and amounts of glucosinolates vary with the crucifer species and determine the level of plant pathogen growth reduction.

This practice could also have other potential benefits and drawbacks. Growers in California have observed for many years that where broccoli residues from processing plants are dumped onto a field, weed populations are reduced the following year. Thus, rotations with broccoli may have multiple pest management benefits. However, in recent years in the Sacramento Valley, crop damage from bagrada bug has been significant. Although these outbreaks have largely occurred in fall, outbreaks have occurred in the spring in this region. Members of the Brassicaceae family are the host plants for bagrada and under favorable environmental conditions would support this pest population.

This management strategy is specific to Verticillium dahliae and is not transferrable to other soilborne pathogens such as Fusarium spp.. Because these two pathogens are common in the Sacramento Valley and above ground symptoms are similar, diagnosis is important. Contact me at any time for disease diagnostic support. All visits and sample analyses are provided free of charge.