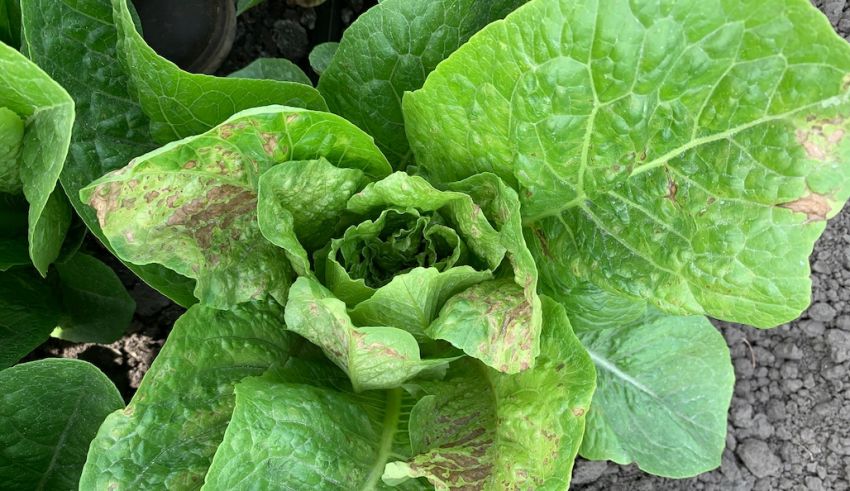 In 2020 the incidence of Pythium wilt (caused by Pythium uncinulatum) of lettuce has increased in severity and in the number of affected fields. Pythium infections in lettuce fields have been observed frequently, but not always, occurring with INSV infection. As a result, there has been confusion distinguishing between these two diseases and the role of each of them in causing the problems in fields. In this blog we will discuss these two diseases and explain from our current state of knowledge about the disease dynamics occurring in affected fields.

INSV has been a production problem on lettuce in the Salinas and surrounding valleys for a number of years and in 2020 it continues to be a serious production issue. Pythium wilt of lettuce is a relatively new problem and was first discussed in a blog entry in October 2015 by Steve Koike (https://ucanr.edu/blogs/blogcore/postdetail.cfm?postnum=19327 ). However, in 2019 and 2020 we have seen an increase in the number of acres affected by Pythium wilt as well as the severity within fields. Given that Pythium is a relatively new problem and the extent of the problem suddenly increased, some growers and PCAs are confronting this problem for the first time. To add to the confusion, at times INSV and Pythium infections are occurring together on the same plants which has caused confusion and has led to much speculation about the role of each disease in the observed damage.

Issues with INSV infections on head and leaf lettuce types are not a new occurrence in the Salinas Valley and many growers and PCAs are familiar with the symptoms and the patterns of infection in the field, especially on romaine. In general, INSV on lettuce causes characteristic patterns of chlorosis and necrosis on the inner leaves of the plant, as well as significant stunting (Photo 1). However, INSV can cause significant necrosis and lesions on and at the base of the ribs of lettuce plants (Photo 2). It should be mentioned that Tomato Bushy stunt virus (TBSV) can cause symptoms that can be confused with INSV and Pythium wilt; however, lettuce dieback symptoms are always seen on the outer, older leaves and the TBSV pathogen is commonly restricted to low-lying areas along the river. In addition, head lettuce varieties and some romaine varieties are resistant to this virus. When in doubt, it is important to have a sample tested. That said, INSV is the overwhelming virus issue facing growers and PCAs in 2020.

One important detail about lettuce plants infected with only INSV is that they do not exhibit wilting of the outer leaves of the plant or show root rot or root discoloration. This is important to note because in 2019 and 2020 we have visited many fields where the plants exhibit symptoms of INSV and have wilting older leaves. In these situations,  the roots and crowns of the plants should be examined for symptoms caused by soilborne pathogens such as the wilt pathogens (Fusarium and Verticillium), Sclerotinia, and Pythium. Fusarium and Verticillium do not cause rot on the fine roots or crown. However, they always cause characteristic vascular discoloration in the taproot and crown of the plant. Distinguishing these two pathogens without a laboratory evaluation is not advised, but in general, Fusarium occurs earlier in the crop cycle and often causes a red-to-brown discoloration internally along the taproot and at the base of the crown. Symptoms of Verticillium on the above ground parts of head lettuce become obvious close to harvest; the taproot and crown tissue of infected plants have dark brown-to-black discolorations. Plants with INSV can also be infected with Sclerotinia (S. minor) which is recognized by the characteristic rotting of the crown tissue of the plant and the presence of white, cottony growth and small blacksclerotia (Photo 3). Plants infected with Sclerotinia easily break off at the soil line when you gently tug on them. However, if the plants do not break off at the soil line and do not show any rot on the crown tissue but do exhibit rot on the fine feeder roots or lower down on the taproot, then Pythium wilt is suspected and can be verified by laboratory evaluation.

Biology and Symptoms of Pythium

Pythium wilt is caused by the water mold, Pythium uncinulatum. It infects lettuce roots with swimming spores (zoospores) that move to the roots within the water film in the soil. Additionally, it produces a second type of spore (oospore) that allows the pathogen to survive in the soil in the absence of a host plant. Previous studies have reported P. uncinulatum is almost exclusively a pathogen of lettuce and does not cause disease on other vegetable crops. However, it remains unknown whether other crops may contribute to a build-up of the pathogen in the soil. Affected plants will exhibit rotting of the fine and tap roots (Photo 4) and frequently dark discoloration of the inner core of the main root (Photo 5). Symptoms of the above ground parts of the plant include stunting, yellowing, and wilting of the outer leaves and eventual death (Photo 6). Sometimes the plants have a characteristic look where the younger leaves remain upright, but the older leaves are totally wilted down to the soil (Photo 7). This year, we frequently observed fields where plants are infected with Pythium wilt but are also infected with INSV. These mixed infections are confusing and make it more difficult to distinguish what is the cause of the damage. In our experience to date, plants that show foliar symptoms of INSV and that have wilting older leaves are typically infected with both INSV and, in many cases, Pythium wilt. It should be mentioned that we have also observed plants infected with INSV as well as Fusarium.

The distribution of Pythium wilt in a lettuce field can be variable. Earlier in the summer, fields with this disease typically were infected along the upper or lower ends of the field indicating that the disease may be responding to irrigation or drainage issues. It is possible that there may be a difference in the level of infection between sprinkler and drip irrigated fields, but we cannot say anything definitive at this time. The disease has been found from King City to Castroville. There is a significant difference in the susceptibility of varieties. In fields with multiple leaf type lettuce, we have observed significant differences in susceptibility among varieties with red types being less susceptible (Photo 8). Recently, there have been severe losses in some fields. It is not clear as of this writing, but it is possible that the incidences occurred in response to the heat spells. It is likely that diseased plants were not able to withstand the weather stress due to damaged roots or that extra water applied to address the heat may have stimulated the development of Pythium wilt. Another observation we have made is that at times Pythium mostly infects the fine roots higher up on the root system and in other situations it is more severe at the bottom of the taproot (Photo 9) which may indicate disease initiated farther down on the root system. Given that the disease needs a period of soil saturation for the swimming spores to travel to the roots, issues with soil preparation, drainage and irrigation management may affect the severity of the disease. Daniel Hasegawa is conducting research on the epidemiology and spread of thrips and INSV. JP Dundore Arias is working on a project with the California Leafy Greens Research Board monitoring the occurrence of Pythium wilt in the Salinas Valley. He is also characterizing isolates of this disease to better understand the organism and will be conducting preliminary evaluations of the sensitivity of the organism to fungicides. Given the rapid onset of severe damage of Pythium and the continued severity of INSV, we are trying to better understand these diseases and how they may interact. We are interested in receiving samples of Pythium wilt. Please contact Richard (rifsmith@ucdavis.edu) or JP (jdundorearias@csumb.edu) to submit samples.