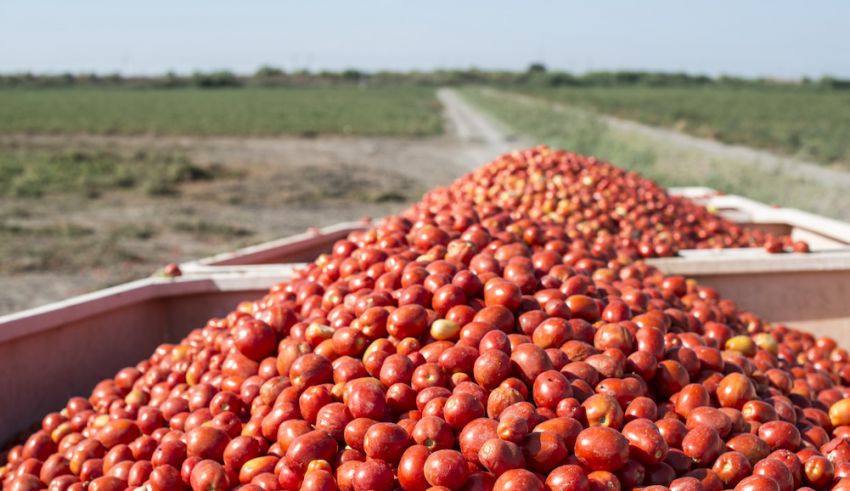 Poor weather conditions during harvest in Sinaloa, the top tomato producing state in Mexico, plus demand and supply chain challenges as a result of the Covid-19 pandemic have resulted in slightly lower forecasted production and trade in fresh tomatoes. However, spring/summer supplies from central Mexico are expected to meet all demand to the United States for the remainder of the marketing year. Fall/winter tomato producers experienced significant effects from the Covid-19 pandemic, due to reduced demand in both the United States and Mexico from the hotel and restaurant industries shutting down operations for a number of months in the spring and summer, corresponding directly with the harvesting season.

Tomatoes are produced in Mexico year-round, with a fall/winter cycle and a spring/summer cycle stretching over 18 months and measured by an agricultural year (AY) from October to March (plus one year). The tomato marketing year is covered from October to September. For purposes of this report, FAS Mexico will refer to the AY in production forecasts in order to capture full tomato production in the country. A full list of Mexican tomato producing states by cycle is provided at the end of this report.

Tomato production for AY 2020 is forecasted at 3.33 million metric tons (MMT) according to the Agrifood and Fisheries Information System (SIAP), three percent lower than the previous agricultural year due to volatile weather in Sinaloa (fall/winter cycle), and reductions to planted area. Cold weather and heavy rains were observed throughout the winter months in Sinaloa, tightening supplies and pressuring prices up through the spring. Contacts in Sinaloa state that due to Covid-19 sanitary restrictions impacting data collection, accurate production data for the state is not yet available. The SIAP production forecast for AY 2021 is 3.47 million MMT, contingent upon favorable weather conditions. AY 2019 production is at 3.44 MMT according to SIAP data, although modifications are expected.

Tomato planted area for AY 2021 is forecasted at 46,510 hectares (Ha) according to SIAP data three percent higher than AY 2020 and contingent upon improved weather conditions throughout the growing season. Planted area for AY 2020 is estimated at 45,102 Ha, five percent lower compared to AY 2019. This reduction can be attributed to drought damage to some fields in central states, and changes from open field to more efficient protected agriculture growing systems that bring about improve yields. Additionally, uncertainties caused by renegotiation of the U.S. -Mexico Tomato Suspension Agreement (please see policy section below) caused many round and Roma producers to plant cucumbers and peppers instead. The Roma tomato is the main variety produced in Mexico, followed by round and cherry. Producer are beginning to increase cultivation of specialty tomatoes, like cherry and grape, based on increased demand from the United States.

Sinaloa is the largest tomato producing state in Mexico, with fall/winter production only. Production is mainly through open field cultivation, but protected agriculture methods are also increasingly utilized. Sinaloa tomatoes are harvested and supply the U.S. market during the winter months, typically from late December through May, and cross at the Nogales, Arizona border port of entry.

Tomato production in the central Mexican states of San Luis Potosi, Michoacán, Zacatecas and Jalisco have seen increases in recent years, with use of both open field and protected agriculture methods. Supplies from the central region enter the U.S. market in the summer months, after the Sinaloa export window winds down in May, and cross through Texas border ports of entry in Laredo and Pharr.

The states of Baja California and Baja California Sur are consequential tomato for export producers, with protected agriculture systems widely used to produce Roma tomatoes, and smaller volumes of vine- ripe and specialty tomato varieties, like grape. The region supplies the U.S. west coast through the Otay Mesa, California border port of entry with an export window of May through December.

Mexican tomato producers suffered significant effects due to the Covid-19 pandemic, especially in Sinaloa, where harvest season fell directly within the onset of the pandemic. With the hotel and restaurant industries in both the United States and Mexico shut down by middle of March, demand for businesses that sell to that sector fell nearly 40 percent. Additionally, many operations were forced to lay off laborers, and some employees left harvest early to return to their homes in the country’s southern states, fearful that they would not be able to return during lock down. As a result, some producers in Sinaloa donated tomato supplies to food banks, some used product for cattle feed, and others simply halted harvest. 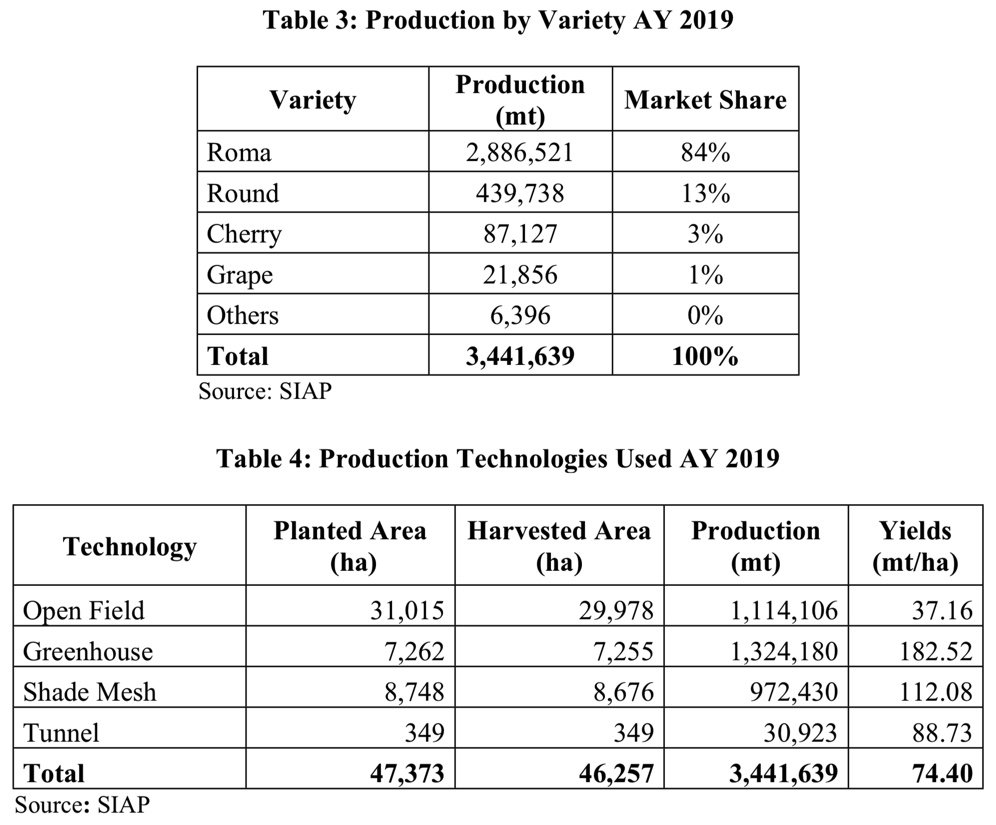 The MY (October- September) 2020/21 consumption forecast is 1.60 MMT. MY 2019/20 consumption is estimated at 1.50 MMT due to slightly lower production during the market year and the closure of the hotel and restaurant industries for several months due to the Covid-19 pandemic. Annual per capita consumption of tomato 16.8 kilograms per year. Producers prefer to export supplies for higher returns, and remaining supplies are sold on the domestic market. However, consumers are price sensitive purchasers. As protected agriculture production continues to increase, so do prices as compared to open field produced tomatoes.

Tomato trade to the United States is economically significant and makes up nearly 99.7 percent market share of total Mexican exports. Exports in 2019 were valued at approximately USD $2 billion. Tomatoes are by far one of the greatest beneficiaries to Mexican fruit and vegetable trade since the creation of the North American Free Trade Agreement (NAFTA) in 1995, when exports were valued at a mere $406 million.

Producers have been consistently improving their production technologies to produce high quality exportable supplies year-round. Export volumes are heaviest in the U.S. fall, winter and early spring months, before U.S. supplies come to market in the summer.

The Post export forecast for MY (October-September) 2020/21 is at 1.87 MMT, two percent higher than previous MY on consistent U.S. demand and ample supplies. The Post export estimate for MY 2019/20 is at 1.80 MMT, with exports to the U.S. forecast at 1.6 MMT, contingent upon the resolution of Covid- 19 demand and supply issues observed in the spring of 2020. Mexico imports a small amount of specialty and organic tomatoes, and sometimes are packaged and re-exported. The Post import forecast for MY 2020/21 is 850 tons, the same level as MY 2019/20, with supplies almost entirely from the United States.

Mexican fresh tomato trade to the U.S. has been managed and implemented by terms of the U.S. – Mexico Tomato Suspension Agreements since 1996, following an agreement between the two countries to cease a tomato anti-dumping case requested by the Florida Tomato Exchange. The original agreement had been reviewed and renewed every five years since coming into force. However, on November 14, 2018 the Florida Tomato Exchange requested that the U.S. Commerce Department terminate the 2013 Suspension Agreement. On May 7, 2019, the Suspension Agreement was terminated, the antidumping (AD) investigation from 1996 was resumed, and duties were placed on Mexican tomato exports to the United States.

On September 19, 2019, Commerce and the Mexican tomato growers signed another agreement suspending the ongoing AD investigation on fresh tomatoes from Mexico. The agreement set reference prices for round, Roma, vine, and specialty tomatoes ranging from $0.31 to $0.826 per pound. It also created an inspection mechanism for all round, Roma, and grape tomatoes in bulk (packages weighing more than two pounds), which began on April 4, 2020, and is carried out by USDA’s Agricultural Marketing Service

On October 14, the Florida Tomato Exchange filed a request for continuation of the AD investigation of fresh tomatoes from Mexico despite a signed suspension agreement. U.S. trade law permits domestic producers to request a continuation of investigations. On October 21, Commerce issued its final affirmative determinations, with dumping rates range from 3.91 percent to 30.48 percent.

On November 22, 2019 the International Trade Commission (ITC) made its final injury determination, determining that “a U.S. industry is threatened with material injury by reason of imports of fresh tomatoes from Mexico that the U.S. Department of Commerce has determined are sold in the United States at less than fair value.” Although the affirmative final injury determination was found, the 2019 suspension agreement remains in force.

AMS Marketing Order for Round Tomatoes

Since 1955, AMS has implemented a marketing order for fresh round tomatoes produced in Florida. Amended in 1986, the order regulates the quality and package requirements and provides authority for research and promotion of fresh round tomatoes grown in Florida. Per section 8e of the order, imported tomatoes must meet the same or comparable minimum grade, size, quality, and maturity requirements as specified in the order. As a result, imported tomatoes from Mexico are subject to border inspection for the above quality requirements from October 10 through June 15.

Mexico typically imports all tomatoes from the United States. Mexico’s most favored nation (MFN) applied tariff rate for tomato (HTS 0702) imports is 10 percent. Countries with tariff-free access to Mexico include the United States, Canada, Chile, Costa Rica, Nicaragua, Uruguay, Bolivia, the European Union, and Japan. There is an applied tariff rate of 28 percent for tomatoes from Colombia. Tomatoes are classified under tariff codes 0702.0001 and 0702.0099.

Tight supplies Roma supplies out of Sinaloa and supply chain complications as a result of the Covid-19 pandemic resulted in high prices for both round and Roma prices on the domestic market. — By Rhiannon Elms, USDA Foreign Agricultural Service 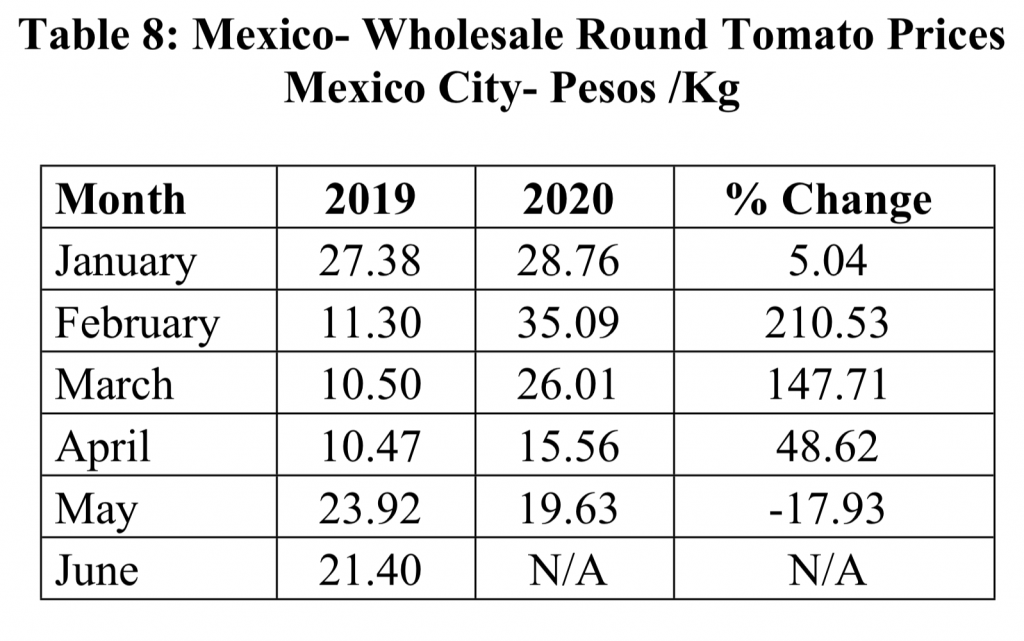 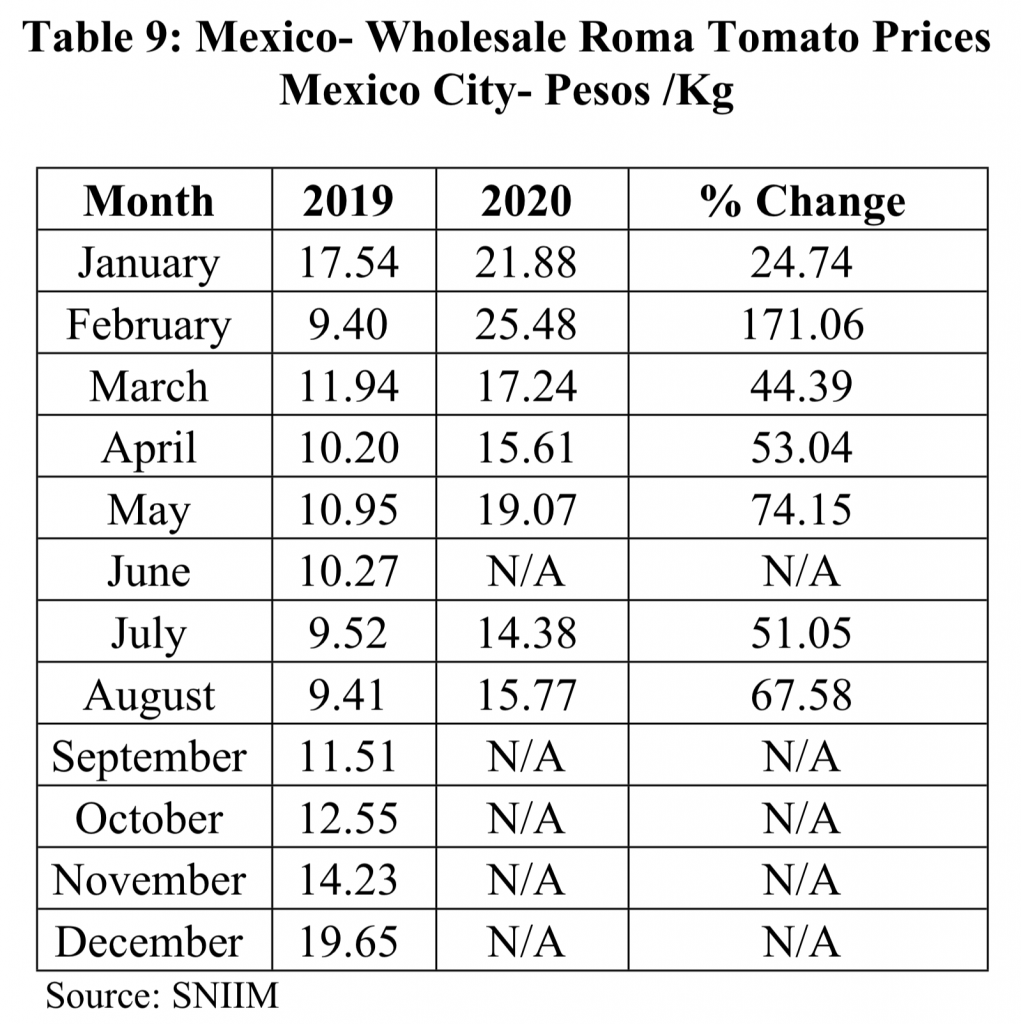 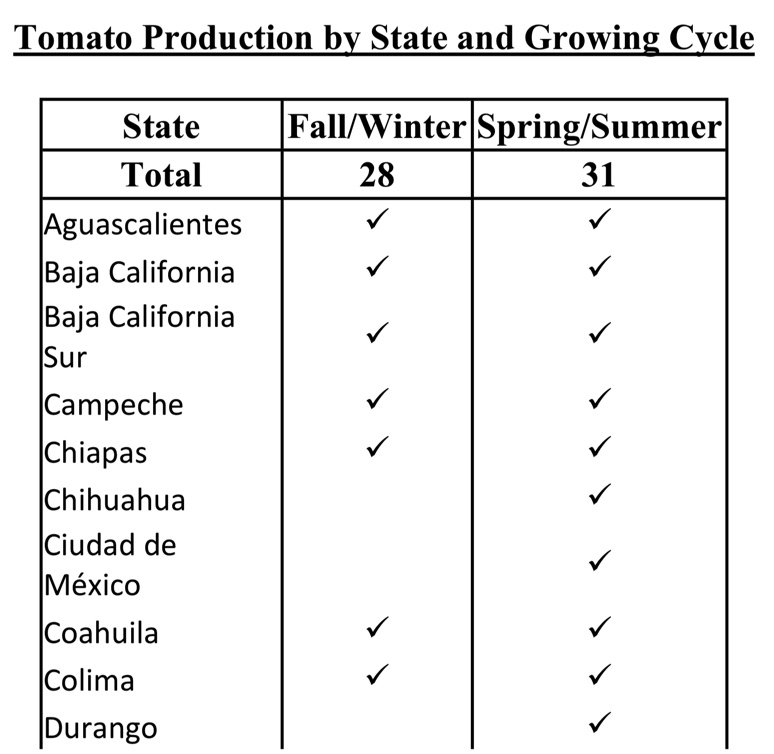 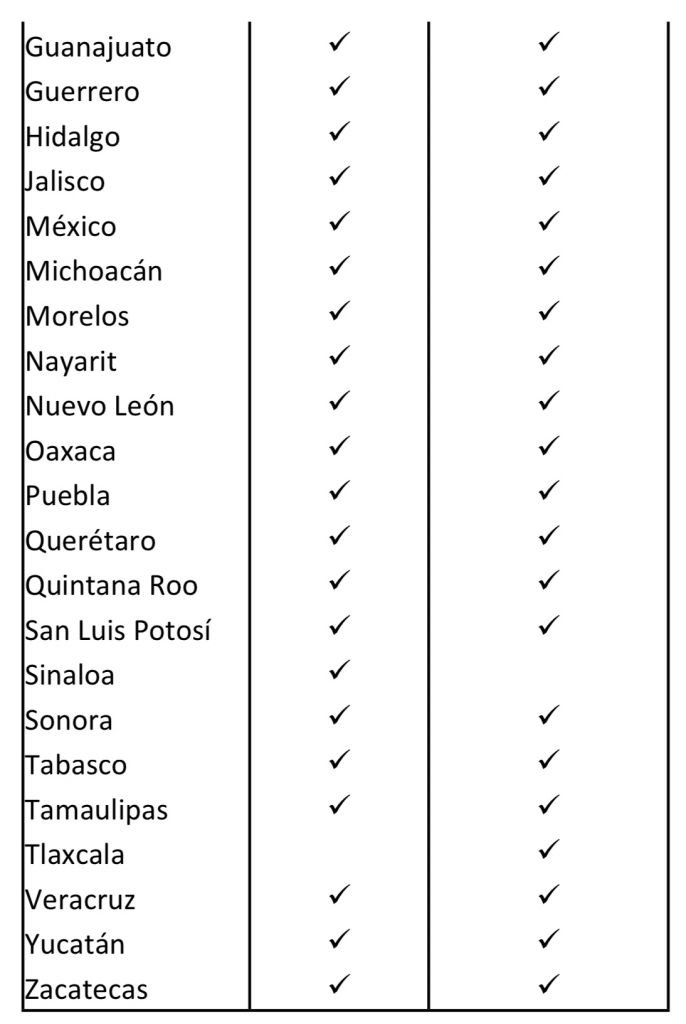