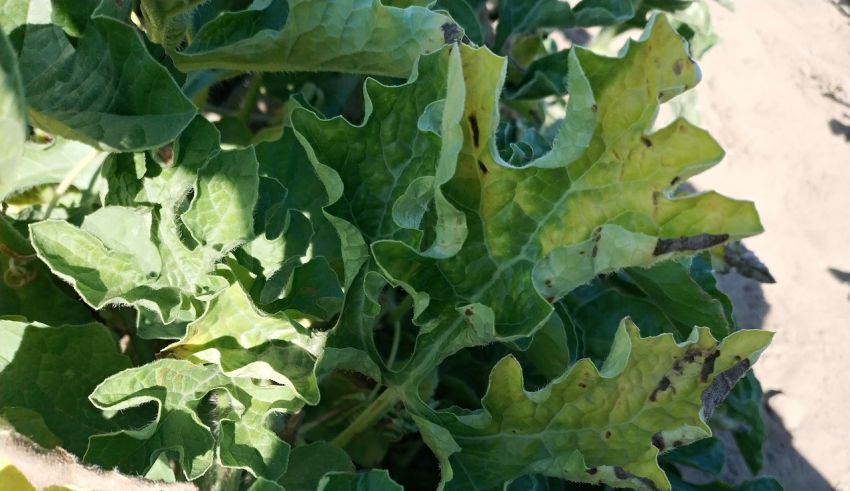 In late June, I was contacted by a watermelon grower and visited his field near the border of Stanislaus and Merced County. In the field, 50% of the plants showed leaf and vine wilt and about 20% died (see the field image). When I made a closer examination, the color of leaf lesions were chocolate brown and stem appeared to be watery (see leaf and crown images). The grower told me that the field was just harvested once but symptoms were already present beforehand. The field was planted by a 45-ct and mini-watermelon cultivars.

An initial suspicion was a fusarium disease and/or a possible Gummy Stem Blight caused by Didymella bryoniae, though this is very uncommon for the watermelon in California. I sent leaf, runner, and stem samples to the UC Davis Fungal Pathogen Lab and the results came back with the Fusarium Crown Rot caused by F. solani f. sp. cucurbitae and possibility of F. falciforme. F. falciforme has not been described to infect watermelon but records showed that it could cause crown rot in muskmelon. Gummy stem blight (Didymella bryoniae) colonies were not recovered from the samples, which did not surprise me because this disease is mostly prevalent in the southeast and north area, such as Georgia, South/North Carolina, and Delaware.

Unlike fusarium wilt caused by F. oxysporum f. sp. niveum, the vascular system of crown rot infected plants typically does not show discoloration far above soil line, instead, necrotic rot of crown and taproot can be seen. As the disease progresses, the rot on the crown develops from a light-colored, water-soaked area to be darker. Eventually, the entire plant wilts and dies. Evidence indicated that fusarium crown rot is more common on summer squash and pumpkin, however, all cucurbits can be infected.

Early planted fields can have a higher chance to be infected as disease is favorably developed under a cooler temperature. Soil moisture does affect the development of the disease. Extremely wet soil especially with drip tape breakage creates a favorable microclimate, which definitely accelerates the reproduction of spores and spread of the disease to other rows. Growers using surface drip irrigation should specifically pay more attention to the tape damage and fix the problem timely.

Various types of information demonstrate that the pathogen (F. solani f. sp. cucurbitae) is seedborne and survives only for two to three years in soil. A four-year rotation of planting non-cucurbit species is usually chosen for the disease control. In addition, choosing clean seeds or fungicide-treated seeds can reduce disease initiation. More information about the Fusarium crown rot on cucurbits can be found at UC IPM: http://ipm.ucanr.edu/PMG/r116100911.html. – By Zheng Wang, UCCE Vegetable Crops Farm Advisor