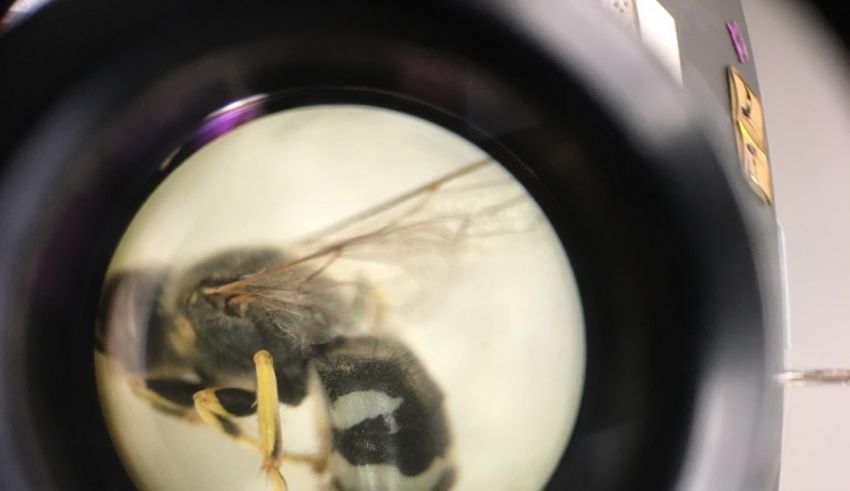 One of the ground-dwelling bees collected for identification. These bees contribute to the farm ecosystem (Photo by Jennifer Fedenko)

Many living creatures live in soil. Though their sizes range from microscopic soil microbes to larger animals like gopher turtles, they all call soil their “home.” Included in these ground-dwelling species are bees – vital in the pollination cycle of about 90% of plant life.

Rebecca Lybrand and her team at Oregon State University are studying the interaction between the bees and soil in agricultural settings.

According to the recently-published paper, bees contribute $15 billion to crop value annually. They pollinate about three-quarters of the fruits, vegetables, and nuts within the United States alone. Declines in honeybee colonies are a critical threat to agriculture and the global food supply.

“Growers who are interested in attracting alternative pollinators, such as wild bees, face a major challenge,” says Lybrand. “There are not many studies about what habitats are best for these wild bees.”

In some cases, growers have been able to build “bee beds” in their farm setting. In the 1950s, they started to design moist, salty soil areas to attract ground-nesting bees that helped increase alfalfa yields in Washington state.

Lybrand’s study looked at physical and chemical properties of soils collected from active bee and sand nest wasp sites in the Willamette Valley of western Oregon. They compared soil properties among seven farm sites to identify similarities and differences.

The nests are only identified by rather small holes (only 3-5mm). The team only collected data if they observed bees entering the nest. Nests and holes can remain even after the bees leave. At the study site, they specified the type of bee to the family level (i.e. “bee” versus “genus” and “species”.) But they also collected some bees to bring back to the lab for further identification.

The data the team collected in the field included soil temperature, pH, and soil texture. They also collected soil samples to bring back to the lab for analysis.

Findings from the study included that active nesting sites were present in locations with little to no rock cover and low vegetation. Nesting sites were found in areas with low organic matter coverage. The slope of the land didn’t seem to have any influence, nor did a north/south-facing aspect.

“One of our observations confirmed that active emergence holes remained open throughout the year,” says Lybrand. “They didn’t swell shut during the wetter, cooler seasons – despite having clay in the soils that might cause shrinking and swelling.”

An interesting finding from the research is that the team found lipids in the soil nest linings. The lipids may provide a type of waterproofing for the nests and their inhabitants.

“Because the large majority of wild bee species nest in the soil, studies about how to best attract them to farms are important,” says Lybrand. “Soil scientists and entomologists can partner with growers to identify soil habitats that support and attract more of these pollinators to agricultural lands. Improving our understanding of the connections between agriculture and the soils that bees, crops, and living organisms rely on to survive is important. Our research also provided a framework for studying ground-nesting organisms – an area of soil science that is underrepresented.”

Looking to the future, Lybrand says, “future research should also integrate methods that identify bees and/or wasps to the species level. That would allow for interpretations of the results from an ecological point of view. Another question to follow up on could be the nature and purpose of the lipids found in the soil nest linings, to confirm their actual role.”

This research was published in Soil Science Society of America Journal. Funding for this project came from an Agricultural Research Foundation grant via Oregon State University.