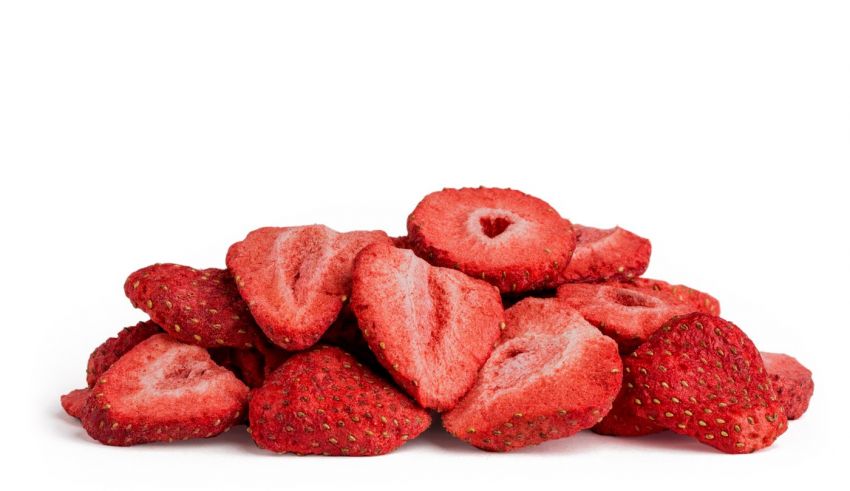 Freeze-dried strawberry powder is so effective a stabilizer that frozen dairy desserts with it included will maintain their shape even after reaching room temperature, according to Agricultural Research Service (ARS) research food technologist Cristina Bilbao-Sainz with the Healthy Processed Foods Research Unit in Albany, California.

To be technically classified as ice cream, it must contain between 10 percent and 16 percent milkfat; everything else is called a frozen dairy dessert.

Without a stabilizer, ice cream—home-made or commercial—can become unpleasantly crunchy with the growth of large ice crystals. It can happen in either or both the ice cream maker or the freezer, when temperatures change. Stabilizers also slow down melting, prevent wheying off (the leaking of a clear watery serum), help avoid shrinking during storage and increase your mouth’s perception of creaminess.

Standard stabilizers such as sodium alginate, guar gum, iota carrageenan, xanthan gum and carboxymethyl cellulose are commonplace. But people tend to react negatively to these unfamiliar, chemical sounding names when they appear on an ice cream label, assuming these must be artificial ingredients.

Actually, many do come from natural sources. For example, sodium alginate is extracted from brown seaweed.

“We discovered that some of the freeze-dried fruit powders—especially strawberries—completely prevent the melt-down of dairy frozen desserts similar to ice cream made with whole milk, whole whipping cream, sugar and skim milk powder,” Bilbao-Sainz said. “Freeze-dried berry powder will absorb moisture from the premix base, improving its stability and texture to the point where the frozen dessert will keep its shape even after “melting” to room temperature.”

This is probably due to the fiber in the berry powder becoming completely hydrated, which contributes to an increase in viscosity and resistance to melt-down, she explained.

In Bilbao-Sainz’s testing, adding 3.5 percent of either strawberry, raspberry or blackberry freeze‐dried powder reduced the water available for ice crystal formation during stirring and freezing, preventing crystal growth and slowing melting. That translates to adding about 0.7 ounces for a 1-quart home ice cream maker.

Strawberry powder was the best stabilizer, completely preventing melt‐down, followed closely by raspberry. While blackberry powder prevented the frozen dessert from wheying off the foam structure still collapsed so it lost its original shape.

Blueberry powder, on the other hand, did not prevent melt-down or ice crystal formation during refreezing, and the frozen dessert showed a little wheying off.

Of course, using freeze-dried strawberry powder as a stabilizer in frozen dairy desserts such as ice creams also means accounting for the added strawberry flavoring—a plus if you are making strawberry balsamic vinegar ice cream, more difficult in a brown butter bourbon ice cream recipe. — By Kim Kaplan, USDA-ARS

This research was published in the Journal of Food Processing and Preservation. The Agricultural Research Service is the U.S. Department of Agriculture’s chief scientific in-house research agency. Daily, ARS focuses on solutions to agricultural problems affecting America. Each dollar invested in agricultural research results in $20 of economic impact.