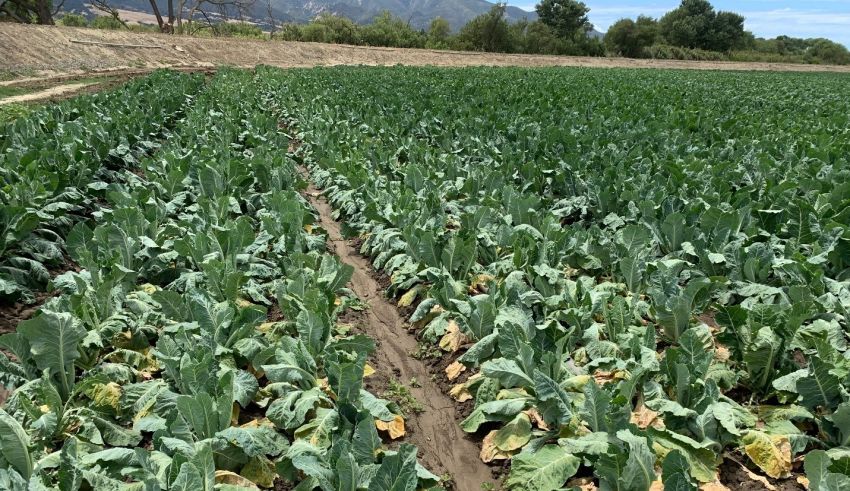 A weak localized area in a cauliflower field infected with clubroot (note stunting, wilting and yellowing of affected plants)

Clubroot disease  can be a serious production issue for broccoli, cauliflower, and other brassicas in the Salinas Valley. The disease  is caused by a unique organism (Plasmodiophora brassicae) that is closely related to ciliate protozoans but is classified in its own taxonomic group. It survives over 20 years as resting spores in the soil that are released as the clubbed root tissue decays. At temperatures above 65 °F, the resting spores release zoospores that swim to host plant roots and infect through root hairs. Once inside the plant, the organism grows into a large multinucleate plasmodium (a multinucleate mass of protoplasm) which stimulates changes in the plant hormones, resulting in enlarged root cells and the characteristic clubbing of the roots (See photo Below). Root infections by the clubroot pathogen can occur in both acid and alkaline soils; however, acidic soil conditions favor the development of the root symptoms. In addition to the main brassica crops, Plasmodiophora can infect arugula, radish, mustard cover crops, and weeds such as shepherd’s purse and even some grasses. Plants that develop severe root swellings will exhibit above ground symptoms (See Photo Above) indicative of non-functioning root systems, which includes yellowing, wilting, poor growth and stunting, drying and death of lower leaves, and eventual plant death.

In 2020 we had calls regarding the incidence of clubroot on brassicas. In each situation the grower/PCA had soil lab results that indicated that the soil pH was greater than 7.2. To investigate this situation, a small study was conducted. At three fields soil was collected from symptomatic and asymptomatic areas of the crop and soil pH was determined using a pH meter at the UCCE or UC Davis Analytical Lab. The results shown in Table 1 indicate that clubroot was more severe in soils with lower soil pH levels. These findings are consistent with what we know about clubroot, that higher pH soils should have less concern with this disease. So why did clubroot occur in soils that had  test pH values greater than 7.2? It is important to keep in mind that soils have a great deal of inherent variability. The goal is to determine if the soil pH for a 5 or 10 acre field is ≥7.2. This is typically done by collecting 15 – 20 soil cores from various parts of the field and mixing them together as a composite sample. However, if sample collection by chance missed areas of lower soil pH, the lab results may be skewed to represent areas of the field that had relatively higher pH values. If this is the case, such a sample could have an artificially high pH (greater than 7.2) while some parts of the field may have a lower pH value. One way to have greater confidence in the soil pH is to collect more soil cores in fields where clubroot disease has been noted in the past.

At present, we have not seen evidence in Monterey County that soils are unresponsive to liming or that the liming treatment is failing to control clubroot, given variability in soil pH and pH testing. In our intensive vegetable production system, soil pH tends to decrease over time through the use of ammonium fertilizers. The loss of calcium, magnesium and potassium from crop removal and leaching can also contribute to lower soil pH on lighter soils. Given the longevity of clubroot resting spores in the soil, it is important to maintain a liming program to assure that soil pHs are above 7.2 to 7.3 to thoroughly suppress clubroot throughout the field. – By Richard Smith, UCCE Vegetable Crops & Weed Science Farm Advisor, and Steve Koike, TriCal Diagnostics