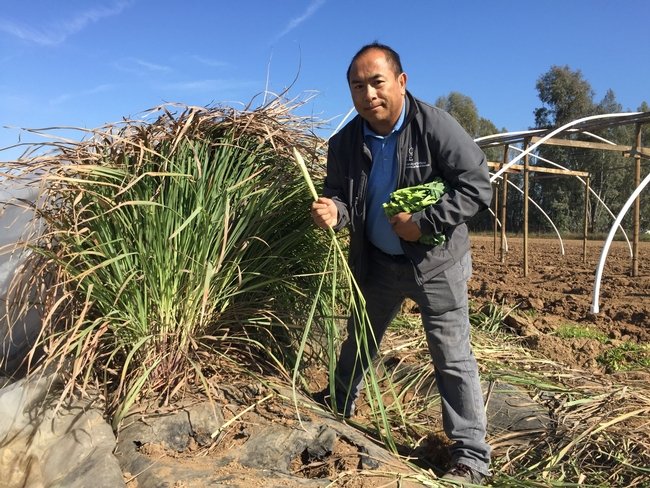 Michael Yang examines broccoli rabe, one of about 200 crops grown by the Hmong farmers advises.

Keeping current on government regulations, agricultural marketing news and crop research advances can be challenging for California farmers, especially for those who speak English as a second language.

Hmong farmers in the San Joaquin Valley can tune in at 2 p.m. on Tuesday afternoons to listen to farm-related news delivered to their radios in their native language from Michael Yang, UC Cooperative Extension small farms and specialty crops agricultural assistant for Fresno County.

For the past 22 years, Yang has hosted the one-hour Hmong Agriculture Radio Show on KBIF 900 AM in Fresno to promote prosperity in the largely immigrant, small-scale Southeast Asian farming community. Yang provides advice on crop production and marketing.

“Fresno County has a large number of small and diversified farms; we have over 1,300 Southeast Asian farms and over 900 are Hmong farmers, according to a survey we did in 2007,” Yang said. “I used to help 250 to 300 farmers every year, in the past couple of years it’s grown to about 400 farmers.”

Yang not only speaks their language, he shares their culture and history. After his father was killed for assisting the U.S. during the Vietnam War, Yang, his mother and three younger brothers spent 4 years of his childhood fleeing on foot through the jungles of Laos, subsisting on vegetation and wildlife, to reach safety in Thailand. The refugee family eventually made it to Fresno, where they took up farming.

The Hmong farmers grow Asian specialty crops including eggplant, lemongrass, long bean, squashes, bittermelon and moringa that they sell at farmers markets or to restaurants. Connecting Southeast Asian farmers to sell their produce at farmers markets has been a vital role for Yang, who serves as a translator and cultural interpreter between the immigrant farmers and farmers market managers. He explains the requirements for participating in the farmers markets and helps the farmers with paperwork and communication. Some growers drive as far as San Diego to get a higher price for their produce; the price can be three times as high at farmers markets in larger cities compared to Fresno.

Sales of Asian specialty crops grown by Hmong and other Southeast Asian farmers in Fresno County are valued at about $17.5 million annually, according to the Agricultural Commissioner of Fresno County.

Although Yang and colleague Ruth Dahlquist-Willard, UC Cooperative Extension small farms advisor, offer workshops and field days to share information, the radio show is an important information source because farmers can listen to the show while they work in the field. Because Hmong Agriculture Radio Show is such a critical tool for bilingual outreach, Dahlquist-Willard continually seeks grants to pay the $75 per show to the radio station. Of the 69 Hmong farmers who responded to a 2015 UC Cooperative Extension survey, 80% said they regularly listened to Yang’s radio show.

“With the help of our Hmong Agricultural radio outreach, I have Hmong farmers calling our office for assistance from Tulare County up to Stanislaus County,” Yang said.

In 2015, during the drought, Yang and Dahlquist-Willard began helping desperate farmers who were running out of irrigation water.

“Wells were starting to dry up. Some Hmong farmers were reportedly calling suicide hotlines,” Dahlquist-Willard recalled. “For the ones with dry wells, it could cost $20,000 to $50,000 to drill a new well.” That is money that most of the farmers, who typically cultivate less than 50 acres, didn’t have. 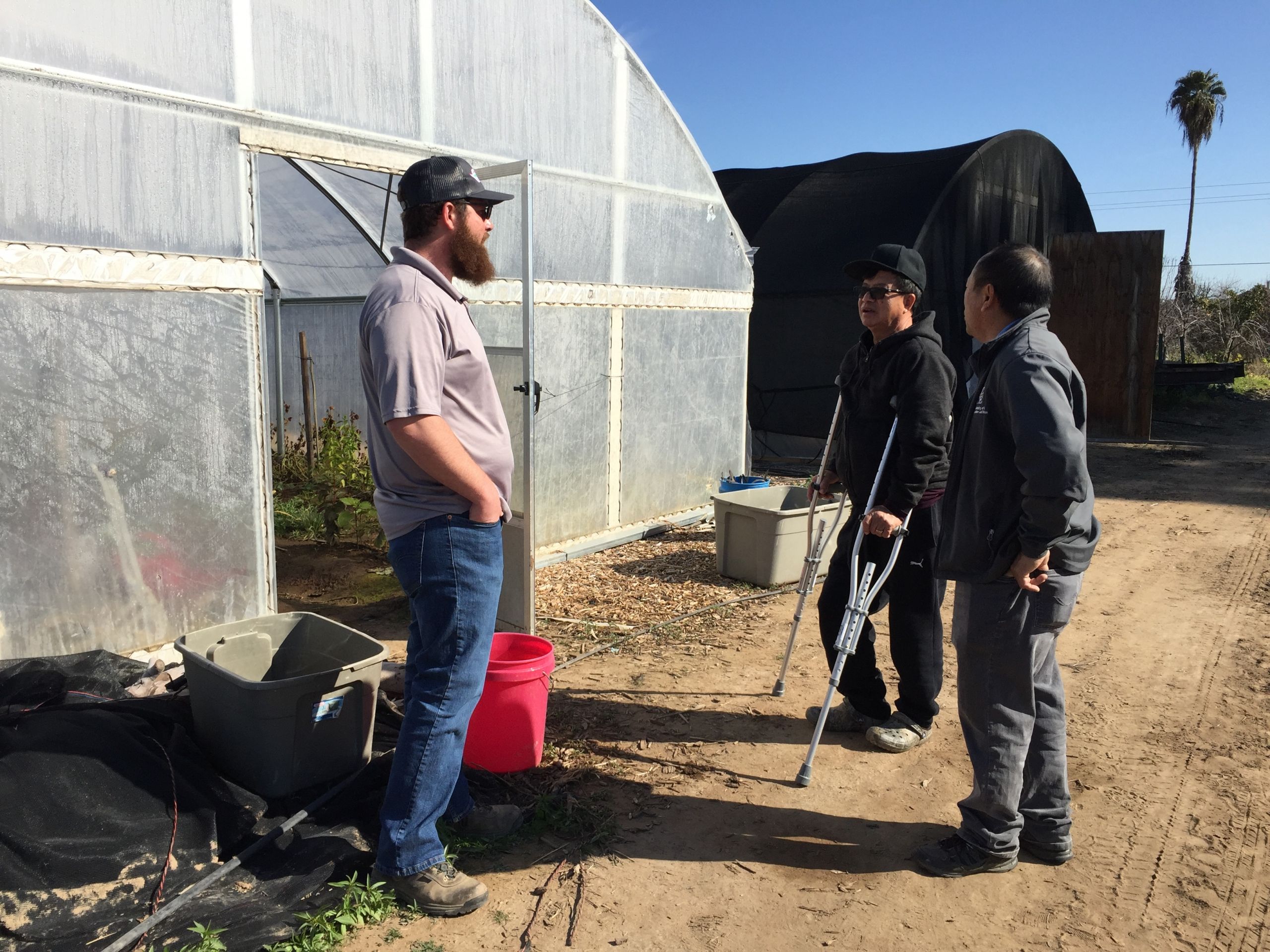 Eighty-seven percent of the Hmong farmers said their utility bills had risen during the drought. Yang, Dahlquist-Willard and Xai Chang, a young Hmong farmer working with UCCE, helped the farmers get a free PG&E rate analysis, which could help the farmers choose the best electric rate for their irrigation practices to lower the expense. The UCCE team also searched for financing to deepen wells for farmers who had difficulty qualifying for USDA loans and helped them apply for grants from the State Water Efficiency and Enhancement Program. With additional help from small farms assistant Jacob Roberson, the UCCE small farms team in Fresno has assisted 36 small-scale Hmong, Latino, and African-American farmers to implement SWEEP projects on a total of 846 acres. The small-scale growers have used SWEEP dollars to invest in technologies like energy efficient pumps, drip irrigation systems and flow meters to save water and reduce their energy costs.

“Michael helped me get a grant to buy a new pump for drip irrigation,” said Xiong Pao Her, who grows about 100 crops throughout the year – including ginger, broccoli rabe, fennel, garlic, green onions, napa cabbage and kale – in Sanger. “It saves me water.”

Obtaining land to farm can be difficult for small-scale farmers so the UCCE agricultural assistant connects farmers looking to rent land with landowners, and serves as a bridge for the language and cultural gaps between the two, according to Dahlquist-Willard.

“There was an elderly couple and their daughter wanting to rent land to a Hmong family, and Michael sat down at the table with all the parties and helped them work out a lease agreement, such as requirements for liability insurance,” she said. “Land isn’t as available to rent as it used to be, but when it was, Michael would get frequent calls from landowners asking if he knew any farmers who would be interested in renting their land. The number of Southeast Asian farmers who have had a successful lease agreement or a successful farmers market stand because of Michael’s help is probably very large.”

It’s not the first time Yang, who has been working for UC Cooperative Extension since 1993, has helped farmers navigate government regulations. Between 2005 and 2008, individual Hmong and Hispanic farmers were being fined between $14,000 and $26,000 for noncompliance with state labor regulations. To provide farmers with a clear understanding of the labor laws, Yang and Richard Molinar, then UCCE small farm advisor, partnered with a variety of community organizations to present information to farmers in English, Spanish, Lao and Hmong at community meetings, on the radio and television, and in trade magazines and newspapers.

“Without the support provided by the UCCE, hundreds, if not thousands, of Hmong farmers would have been added to the victim list for not knowing or understanding the laws. The UCCE has gone many extra miles to fill gaps between enforcement agencies and the Hmong farming community,” Toulu Thao, a Hmong activist, said at the time.

To help farmers decide which crops are most profitable to plant, Yang collaborated in the past with UC colleagues to estimate production costs for some Asian vegetables including sinqua, moqua, opo, longbean, bittermelon, oriental eggplant and lemongrass.

Yang currently advises Hmong growers on about 200 crops and continues to learn about new ones as farmers market customers ask the growers to produce fruits and vegetables from other cultures.