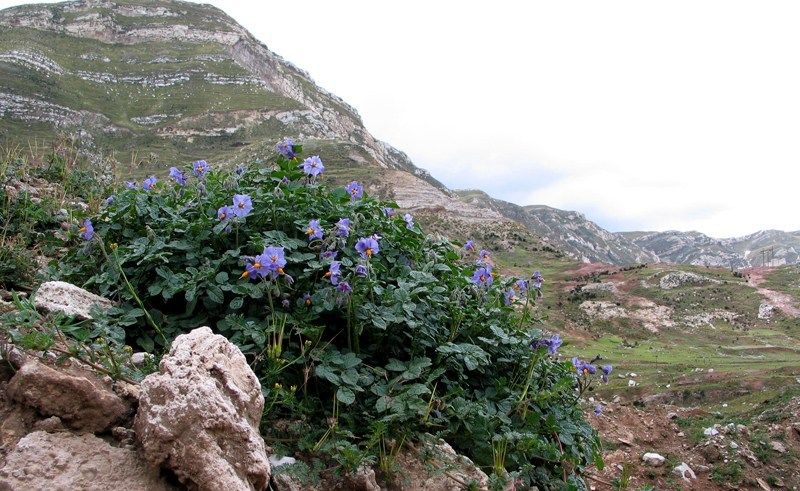 These wild potatoes grow along a hillside in the Andes. Using genetic material from crop wild relatives of potatoes can improve disease resistance, and even traits like creaminess or flavor. Provided by Shelley Jansky.

It may surprise you to learn that wild potatoes grow like weeds in South America. While farmers in the United States battle weeds like pigweed and lamb’s quarters, farmers in the Andes Mountains have to keep weedy potatoes in check. These wild relatives of our potato varieties grow in agricultural fields and roadsides, as well as in forests and grasslands. They are found in amazingly diverse habitats, from ocean beaches to windswept alpine meadows. Some even grow in the knotholes of oak trees.

As you can imagine, wild potatoes must grow in these stressful environments without the aid of fertilizer, irrigation, or pesticides. Consequently, they are rich in genes that are useful for potato improvement, especially stress tolerance. Breeders usually refer to native, weedy versions of plants as “crop wild relatives.” Collecting and preserving this genetic diversity is crucial to today’s food supply.

In the Andes, local villagers eat potatoes daily, as part of their native diets. They have selected varieties for diverse tastes, textures, and cooking qualities. Cultivated potato relatives are also important to breeders. These land races are valuable sources of genes for culinary traits. The US Potato Gene Bank in Sturgeon Bay, Wisconsin, maintains a large collection of wild and cultivated potatoes. My job is to find useful genes in the gene bank and bring them into cultivated potato so breeders can integrate them into their variety development programs.

My favorite wild potato, Solanum chacoense, carpets regions of the Chaco province of northern Argentina. It is one of the most broadly adapted wild potato species and has been collected extensively by scientists around the world. It carries a broad array of genes of interest to potato breeders. One clone in my program, named C545, has S. chacoense as a maternal grandparent. Another wild potato, S. berthaultii, is a paternal grandparent. C545 has resistance to several important diseases, including Verticillium wilt, potato virus Y, soft rot, common scab, and early blight.

Another wild potato important for breeding is Solanum berthaultii, which is found on forested and brushy hillsides from southern Bolivia through northwest Argentina. This species was named after the French agronomist Pierre Berthault. The most characteristic feature of S. berthaultii is the production of sticky hairs on its leaves. For this reason, it has been used in breeding as a source of insect resistance. The varieties “Prince Hairy” and “King Harry” are two specialty potato varieties with insect resistance genes from S. berthaultii. While wild potatoes typically produce small (dime-sized) tubers, hybrids between cultivated potatoes and S. berthaultii often produce large beautiful tubers.

Our most Verticillium wilt resistant breeding line, C287, features S. berthaultii as a grandparent on both sides of its pedigree. When I was a graduate student (a few decades ago!) I created and selected two clones that I named S438 and S440. These selections have S. berthaultii as a grandparent and have been used extensively as a source of improved processing quality in the development of new potato varieties.

Wild potatoes also contribute genes for traits related to cooking ability. S. chacoense is a great-grandparent of the cultivar Lenape, which is credited for laying the foundation for the development of cultivars used for making potato chips.

Phureja varieties have been selected by South American farmers not only for unique tuber traits, but also for exceptional culinary quality. Our best sources of genes for improved flavor have been found in Phureja, which produces tubers that are more flavorful, creamy and savory than standard potato varieties. Those of us who are impatient cooks might also be interested to learn that some Phureja varieties are done in half the normal time needed to boil potatoes.

There are over 100 wild potato species and breeders have just scratched the surface for new variety development.  As climate change and a growing population put additional strains on potato growers, we will continue to explore the possibilities offered by this rich genetic resource.

To read more about Dr. Jansky’s work, or to watch a video, click here.